The Dig for Victory campaign was launched in 1941 at a time when food imports to Britain were being blocked by a very successful enemy naval blockade – mostly using submarines. Today, of course, the enemy is the Covid-19 pandemic, which is disrupting our lives in so many ways. But I have noticed one rather odd thing. All the news media are covering urban areas and rural communities are scarcely ever mentioned. I have to confess I’m getting rather fed-up with hearing about how ‘we’ can make short trips to the countryside to take exercise – and so forth. Trouble is, we never hear anything about the rather different problems that people living on farms and in rural villages face.

Many of the villages around us have organised groups of volunteers who do weekly shopping trips for pensioners and other at-risk people (as we’re both over-70, our shopping is collected by two such volunteers, for which many thanks!). There are also several village-based internet social groups whose posters are popping up in several local communities. I don’t know how the lock-down powers-that-be who rule the urban world would react, but many gardeners are freely exchanging fruit and vegetables (I do a daily asparagus round to local friends) and at this time of year surplus plants are being exchanged – especially to younger people who are only just starting to grow their own food. One good thing to come out of all this might well be a rise in the number of home gardeners. And once you’re hooked on gardening – be warned! – it can become a lifetime’s addiction. I’m well and truly hooked. Never will I forget that moment when I ate my first home-grown ripe tomato. There was an explosion of flavour! At the time (the 1970s) shop-bought tomatoes tasted quite literally of nothing. Every year you will find that that first tomato is special, but also slightly different, depending on the spring, the compost, the variety and a host of other variables. That’s another great thing about gardening: no two years are ever the same. You are never bored when you eat your own food!

The new heated greenhouse has been a godsend and I’m still learning my way around it. The interior may look a bit chaotic, but believe me, there is method in my madness. Here’s a glimpse through the door in early May: 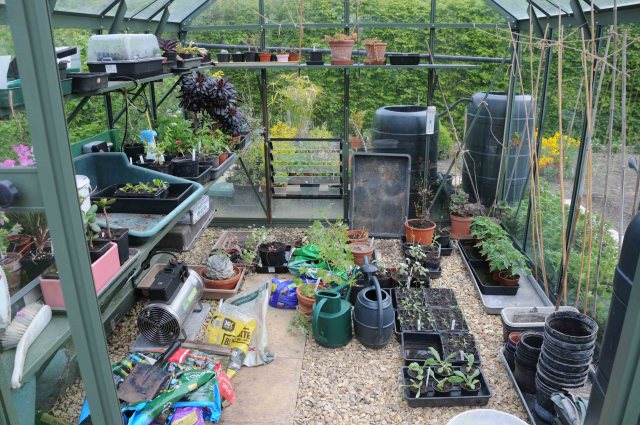 Next is a close-up of the tomato seedlings, freshly potted-up. In about a fortnight I’ll be able to pot them up again, into slightly larger pots. The trick is to wait till you see the first white roots showing through the water in the bottom of the tray. When all the pots are showing roots, it’s time to pot-on again. When they’re in 4-inch (10 cm) pots they’ll be ready to go into a grow-bag or the garden. Mindful of the need not to discard too many seedlings I’ve potted-on five dozen tomato plants, of different varieties. Normally I’d use about 18 – at the most. So I plan to give the rest away to anyone living nearby who needs them.

Several of our neighbours have offered us joints of beef and lamb, but there seems to be something of a shortage of young point-of-lay chickens. I gather this shortage is universal and there are stories in the local press of gangs coming out from towns to steal them. We heard of a local man who always raises a few dozen chicks and we were able to buy three off him. The traditional breed, Light Sussex, is new to us but we’ve looked them up and they have a docile reputation and prefer being free-range. Our new chickens are strictly-speaking ‘a trio’ of two hen birds and a cockerel. I took this picture on the day they arrived, in late April and they should be laying eggs in later summer. By then we may also have bought two or three additional hens who will be kept in order and protected by the cockerel. In our experience, if there’s a cockerel, the hens tend to stray less and don’t fight among themselves so much.

A few days after we had received the chicks I had been cleaning my teeth with my smart new electric toothbrush (which has done wonders for the health of my receding gums!), when my eye was caught by the sun on the golden guelder rose (Viburnum opulus, ‘Aureum’) outside the window and the view of sheep peacefully grazing on our land beyond. So if you live too far away to take my tomato seedlings, I thought I’d share a little piece of the countryside, instead.

Whenever I’m out by the pond, whether I’m pruning shrubs, weeding or just taking the dogs for a walk, I listen-out for the distinctive ‘yaffle’, the loud, sharp repeated call (I hesitate to call it ‘song’!) of the green woodpecker. We have several pairs of these birds, which feed on ant hills in the nearby meadows, and who make their homes (again, I hesitate to call them ‘nests’) in the trunks and branches of pollarded willows we planted back in 1995. By now these fast-growing trees are fully mature and many already have heartwood rot, which those clever woodpeckers seem to know about instinctively. So with loud machine-gun pecks they bore neat, circular holes through the outer sapwood and make their homes in the soft, dry rotten wood at the centre. Sometimes when you’re passing close-by you can hear quieter pecking sounds coming from the centre of the tree, as they enlarge and add the finishing touches to their new homes: a tasteful Gothick archway here, a louvred sitting-out space there.

As a keen gardener I’ve long-since discovered that Mother Nature likes to tease. We have just endured the wettest winter on record, but back in March and early April, when I wrote my last blog post, I didn’t like to mention it, but I’d been surprised that we hadn’t lost more plants to root-rot. Then we had a sunny, dry April and Mother Nature revealed her hand. So far, I’m fairly convinced that two mature apples have been killed, one of them a lovingly pleached tree in the vegetable garden. The wet has also hastened the demise of shorter-lived shrubs, such as Viburnum and one or two elderly roses, not to mention several Buddleia – although this wasn’t a surprise as our land is a bit wet for them anyhow. I’ll keep an eye out for seedlings in the next few weeks and pot them up as replacements to go in later. The big horror has been the large box hedge which surrounds one of the beds in the rose garden. It’s growing (or dying) in the wettest part of that garden and I’m fairly certain it isn’t the dreaded box blight, as we haven’t bought-in any box plants for at least 15 years. If this was a professional garden we’d grub-up the entire hedge, but we’re less ruthless so we’re going to try alternatives, once we’ve removed the dead plants. The live box bushes are full of insects and other life, which is why I don’t want to kill them unnecessarily.

We can’t be absolutely certain at this stage, but it does seem very likely that our annual garden opening for the National Gardens Scheme (scheduled for the weekend of September 19-20) isn’t going to happen – thanks to the Covid pandemic. In my next blog I’ll have more to say about what the NGS is planning to do to raise funds for those mostly medical charities it, and we, support through our garden open days. But Maisie and I decided back in March when the lock-down was announced that we’d use the potential lack of visitors as an excuse to do some root-and-branch garden improvements, such as the cutting down and rejuvenation of the rose hedge that runs along the drive on the other side of the pollarded willows, which are home to our woodpecker friends. We had contractors help us (all working at a safe ‘social distance’) and it only took a day to complete, but that hedge had terrible die-back. I’ve given it a good feed and it’s already (just three weeks later) starting to recover.

There’s been a fair bit in this blog post about death and destruction, so let’s end with something positive: probably my favourite garden plant, Wisteria. I don’t think the Wisteria on the front of the house has ever looked better. Ok, so it may be bending the gutter in a few places, but who cares, when every night it’s in bloom the garden and the rooms above it (including our bedroom) are suffused with that delicious scent. The bees, including honey bees, love it, too. Some unpleasant things may recently have come from China, as that nice, disinfectant-drinking Mr Trump likes constantly to remind us, but Wisteria sinensis is certainly not one of them. 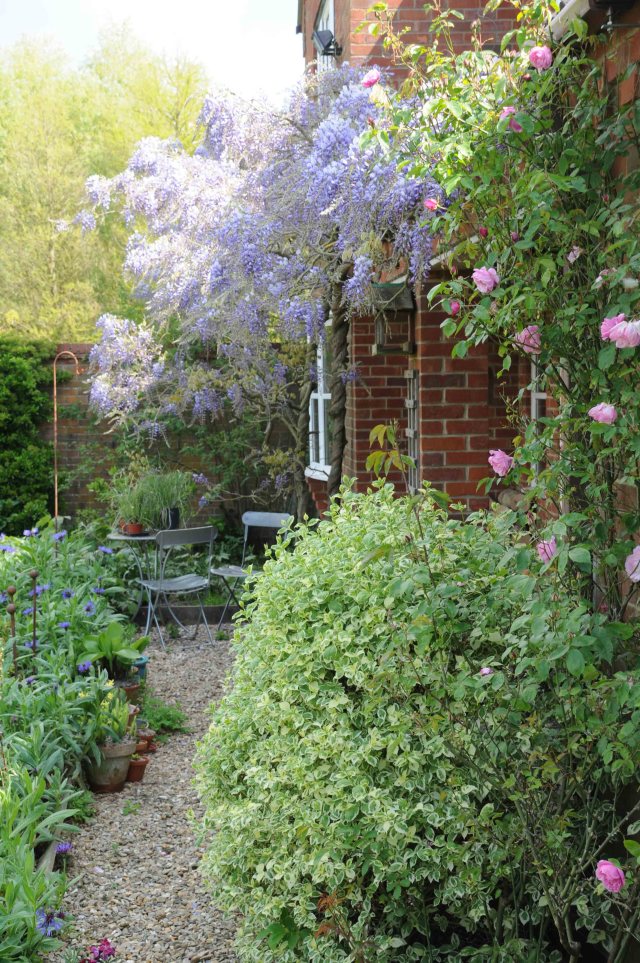