Following the success of this year’s NGS Open Garden, I was preparing myself for something of an anti-climax autumn. But first I had to head north for a Time Team/Dig Ventures event which took place on Lindisfarne, Holy Island, the following weekend. For non-UK followers of this blog, Holy Island is a tidal island in the North Sea, just off the English coast, close to the Scottish Border. It’s famous in archaeology and history as the place where Viking raiders made their first attack in AD 793. It also gave its name to the Lindisfarne Gospels, one of the greatest illustrated manuscripts of early medieval Europe. I think this photo of the Castle captures the atmosphere of the place, quite well. I suspect the rest of Britain will feel a bit like this, after Brexit.

The Lindisfarne event was great and it was fantastic to get together with Time Team pals: Tony Robinson, Stewart Ainsworth, John Gater, Helen Geake and Carenza Lewis. All were on top form and didn’t seem any older. Odd that. Meanwhile, back home in the real world, I have been very busy doing the final editorial work on a book on the Fens I’ve just written for Head of Zeus (the people who published my Stonehenge book). The Fens book will be published next June. Earlier in the New Year (on January 1st, in fact) Penguin will be releasing my Paths To The Past in paperback – and there are one or two very minor corrections I need to get sorted out in the next few days. And then of course there’s the follow-up book to The Fens, which I’ll be working on in late autumn, winter and next spring. But that must remain confidential for the time being. No rest for the wicked!

Out in the garden, we thought the dry conditions of August and September would soon improve, but in fact we were wrong: heavy rain didn’t arrive until last weekend (October 13-14) when I recorded an astonishing 40mm in the rain gauge! That’s almost a record for this dry part of England. Maybe it was the extended dry spell, but autumn colours have begun quite early, as these views of the garden (all taken a week ago, on October 10th) show. The first shows the meadow, with the two clumps of pampas grass in their full glory. Sadly, the tall tassels hadn’t come fully out for the Open Weekend.

A view of the meadow in early October, with autumn colours just starting to appear.

My second garden view is taken along the Serpentine Walk (sorry if this sounds pretentious, but we called it that as a joke – and it’s stuck!). The colour changes here aren’t very obvious and are mainly confined to some low-growing hostas and sedges. But the big change from the summer is in the leaf-density of the alder and birch trees, which were quite hard hit by some fierce gales in September. The thinner leaf-cover gives a wonderful pale, dappled feel to the sunlight, which you can really notice when you walk along the path. I often think that dappled shade is one of the great secrets of a good English garden. Too often people think in terms of ‘sun’ or ‘shade’ or (worse?) ‘part shade’. The reality of nature is far more subtle. 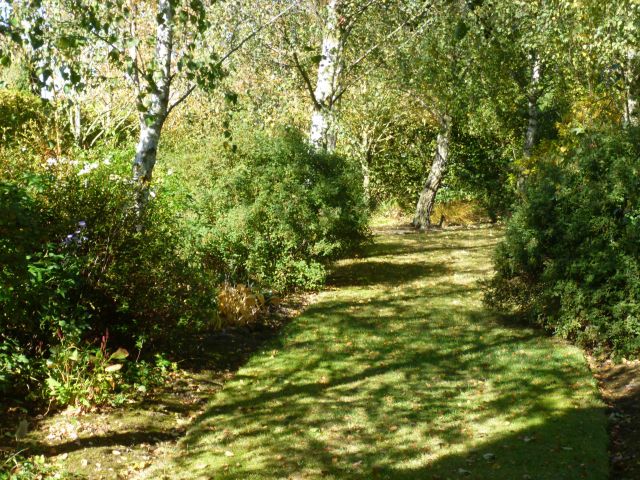 A view along the Serpentine Walk, with the Glade in the middle distance.

The southern side of the Long Border is bounded by the tall hornbeam hedge, which protects the vegetable garden behind it from the worst of winter’s sharp north-easterly gales. This side of the border has proved quite challenging to plant, being both wet and shady. The planting and planning of the borders is Maisie’s responsibility (I just lift and divide large perennials when instructed to do so) and I know she has found this particular stretch very challenging. Indeed, I have heard the words ‘impossible’ and ‘bloody’ muttered under her breath from time to time, between loud and lengthy sighs. Yellow is the theme-colour here, to lift some of the dark shades thrown by the hedge. This year those yellows have proved to be more than usually vivid – yet harmonious. I think this picture captures that quite well. 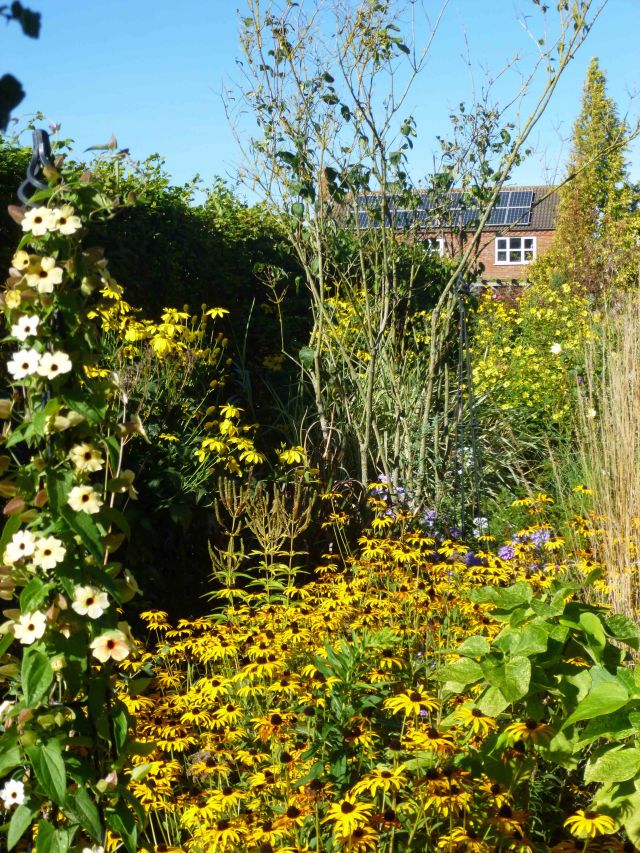 A shady part of the Long Border, where yellow flowers predominate. Note the Black-Eyed Susan (from Sarah Raven) on the small obelisk (left, foreground), 2 varieties of Rudbekia in the mid-foreground and the tall Helianthus Lemon Queen, in the background.

After a rather hesitant start, following the cold, wet spring, the fuchsias really got going later in the summer. They were particularly good in the autumn. Maisie bought a fuchsia off a roaside stand in north Norfolk. The old boy who manned it swore blind it came from the royal garden at Sandringham. Believe that, if you will. We reckon it’s either ricartoni or gracilis – probably the latter. In March it was severely cut back by the late frosts and we were inclined to write it off for the Open Weekend. But we shouldn’t have worried. It came back – and with a vengeance. I don’t think it has ever looked so good.

The front garden, with Fuchsia gracilis climbing up the wirework dome and the rose Sharifa Asma in the background.