I don’t think I can ever recall such a bitterly cold April. We’re now in the last week of the month, the wind has refused to switch west or south, so stubbornly chills us from the north and east. Normally these breezes, though bitter, are fairly dry, but this year they’re bringing us stinging showers of sleet and hail. And of course the poor young lambs hate it and stand alongside hedges and barn walls looking pinched and frozen. All we can do to help is provide lots of dry straw in the barn and, of course, plenty of food for their mums. Having said that, when they do come into the barn, they do look very well and seem to be growing quite rapidly. But out in the garden things are looking remarkably wintery. There are still more than a few daffodils in flower, albeit rather wind-blasted and tattered, and the late bulbs – tulips especially – are just coming into flower, fully three to four weeks behind an average season. Oaks are just starting into leaf, but ash refuses to budge – even alder, normally quite an early bird to leaf-up, is struggling to burst its buds. Brrr…

Yesterday, the sun came out between the clouds, so I decided to take a stroll and show you what the garden looks like in this cold Spring. And bits of it, I have to confess, look almost welcoming. I decided to take Pen (our adorable almost-two-year-old Labrador x Border Collie bitch) for a walk, too. She loves the camera and manages to appear in several of the images, for which I make no apology. We began our stroll in the long strip of grazing that runs alongside the Drainage Board dyke that bounds our property to the east. When we bought the land, back in 1992/3, I sprinkled a pocketful of cowslip seeds onto the freshly sown grass. Today they form a carpet, but this year I wanted to draw your attention to the clean white blossom of the wild pear trees that are mixed into the trees that fringe the main wood. I don’t think they have ever looked better.

From the walk along the dykeside Pen and I then headed into the wildflower meadow which we planted to the south and east of the wood. Here the snakeshead fritillaries and cowslips were looking stunning and I couldn’t help being reminded of my cousin, the distinguished ecologist and pioneering environmentalist, the late Professor Norman Moore, who planted his own nature reserve near Cambridge and which gave Maisie and I much inspiration. I can remember Norman getting wildly excited about the dragonflies (on which he was the leading authority) at Flag Fen, at a time when all most people could detect was the stench of raw sewage from the neighbouring treatment works. Norman and his wife Janet were lovely people – smiley and warm, yet highly intelligent. They are both hugely missed by all who knew them. 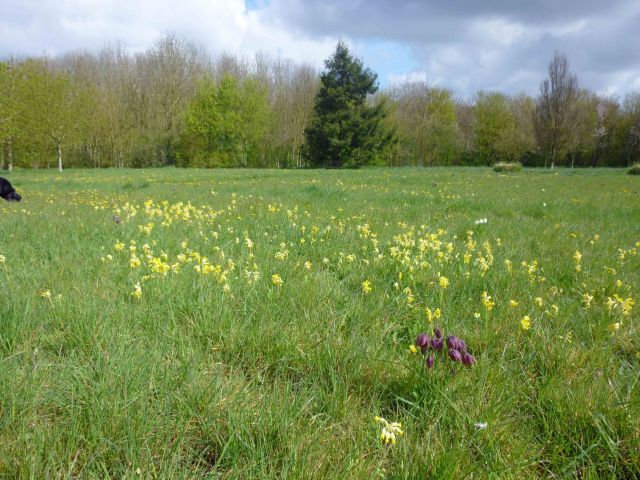 When the winds are chill, I find my feet tend to lead me towards the inner and most sheltered parts of the garden. These areas aren’t always to Pen’s taste, as she prefers to rush about following the scent of hares, squirrels and Muntjack deer, none of which she ever actually catches. Squirrels particularly enjoy teasing her. They scratch around on the ground as she careers towards them, then hop nimbly onto a low branch, just out of reach, which drives poor Pen berserk with frustration. I have to confess this makes me roar with laughter. One of the quietest parts of the garden is around what is now quite a large Dawn Redwood (Metasequoia glyptostroboides). Our late, lamented sheepdog Twink used to take a shortcut here, which we’ve subsequently covered with wood chippings. At this time of year the Euphorbias along it are looking quite good, but I like the woodland feel and the lack of formality, here. So does Pen. I doubt if she realises that informality often takes harder work to achieve than the more architectural plantings of borders and rose beds.

There has been a lot of fuss lately about the National Trust charging people to visit a bluebell wood near London. But bluebells also look good in fringe areas, away from the great expanses of blue that we are all so familiar with. We’ve been at pains not to include any Spanish bluebells in our plantings which are, I think, fairly pure native British varieties. Here they’re looking very good when viewed from the outside of the Nut Walk, with a crab apple (Everest) in full flower above them. I like this sort of under-stated garden scene. It’s very English. Very laid-back.

At the house end of the Nut Walk there’s a lawn which runs down to the pond. At this time of year it’s packed with newts who have to put up with Pen joining them occasionally – and especially on hot days. This season she was in the pond more frequently in January than April. In this picture her nose is facing the northerly wind and it’s clear from the way she’s standing that a quick swim with her newty friends is out of the question. Below her, the summer snowflakes (Leucojeum aestivum) are looking pretty good. Around the fringes of the water, you can see the long pointed leaves of the flag iris (Iris pseudacorus) just starting to emerge. I suspect they’ll be flowering a bit late this year, maybe even in July. I think this picture also illustrates that wildlife-friendly gardens aren’t particularly neat and tidy: they’re under control, but not obsessively so. 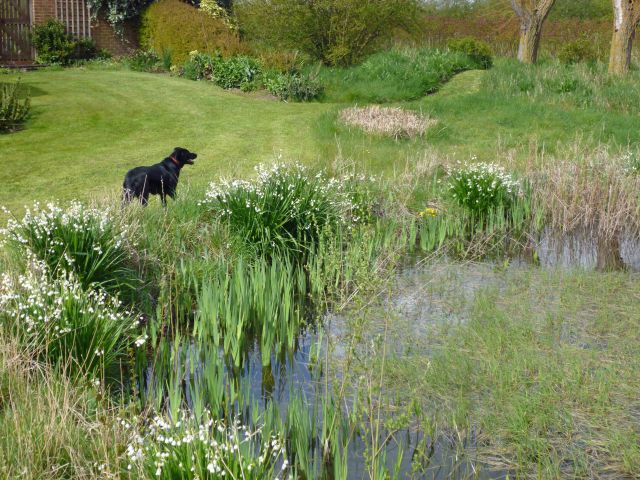 Which leads me neatly, if not tidily, to my final picture: a solitary cowslip surrounded by closely mown grass. Now I have to confess, I’m not a lawn person. Don’t get me wrong: I like them. I even like stripey lawns, but I’m quite happy to live with a few dandelions, clover and of course daisies. I’ve even been known to plant them – with a nice red flush to the back of the petals. The thing is, a ‘weed’-rich lawn is host to large numbers of bees and other pollinating insects, which are sadly becoming increasingly rare. Clover also helps keep the lawn green in the driest months of summer, which can be very problematical here in eastern England. So no, you won’t find me in the lawn-care departments of garden centres and with an acre and a half of grass to cut, you won’t find me feeding it either; that’s because the nitrate nodules in the clover roots do that job for me. And that’s why I find it hard to mow cowslips that find their way into the grass. They’re everywhere now, and are far, far too numerous to transplant. Obviously I can’t avoid them all, so some get a couple of weeks to feed the bees and flower – before the mower catches them. But then that’s life in the garden: here today, gone tomorrow. But never dull.