Sorry About the Silence

It has been a long time since I sat down at this keyboard and up-dated my blog, but I’m afraid events got the better of me. After all these years, I’ve discovered that I am indeed human and bits of me can sometimes cease to function. In that respect I’m rather like my old (1964) International  B414 tractor which didn’t operate in the early summer because a family of wrens had decided to take up residence, and raise a small family, inside the lift-arms of the muck-bucket. They didn’t move out until  well into June, by which time the grass in the orchard was up to my waist.

Lambing went well and finished in mid-April; and for a month thereafter we concentrated on feeding the lactating ewes and looking after the lambs. Quite early in May I had a consultation with the dermatology specialist in Kings Lynn Hospital, who suggested I should start the course of skin treatment I discussed in my last blog post. I applied the first cream on May 14th and by the end of the month it was starting to feel very uncomfortable. At this point I will show a selfie of my face that I took yesterday:

I think you’ll agree I’m looking very much better. The pain has gone entirely as has the dryness and flakiness. I don’t need to apply aloe vera and moisturiser, but I do – just to be safe. And you’ll never find me outside without my trusty Canadian Tilley Hat and a layer of factor 50+ sun-block. I finished the course of cream on June 28th and I have to concede, it made me feel pretty grim. It took another three weeks to feel better, but after a fortnight progress was quite rapid – helped by rose-hip oil pressed on me by kind neighbours and my new friend-for-life, pure, unscented aloe vera gel.

On July 1st we sheared our much-reduced flock of about 50 sheep and were delighted to welcome a new shearer, Kaylee Campbell (all the way from sunny Norfolk) who did a fabulous job and treated the animals with enormous care and consideration. It was a treat to watch Kaylee, who must weigh around half my weight, handle 60 kilo ewes as if they were made from Styrofoam. Admittedly she did need some assistance when it came to the largest rams (90 kilos?), but then so did most of our previous shearers. When it comes to rams, shearing doesn’t always follow the textbook. It must be fun to watch.

Meanwhile, throughout June I was carefully reading and correcting the first and second proofs of my Penguin book, HOME: A Time Traveller’s Tales from British Prehistory, which will be published on October 3rd. I also managed to pull a muscle in my back, probably because I was so unfit thanks to the face cream and enforced periods of inactivity indoors – frankly it hurt to rub-in sun-block, so I couldn’t venture outside. So I read many of the proofs at an improvised ‘desk’ of piled-up cardboard boxes. That way, I could at least stand and read – which was much more comfortable.

Between batches of proofs, we managed to snatch a 5-day break at the Vivat Trust’s wonderful little Church Brow Cottage at Kirby Lonsdale, Lancashire. I feature it in The Making of the British Landscape (pp. 502-3). Vivat have done a wonderful job there: the garden is kempt, but rambling and the place has a splendid authentic  Regency feel to it. And even the supermarket in Kirby is superb – why don’t we have a branch of the wonderful Booths in south Lincolnshire?

I returned to more proofs and captions, then on July 15th our neighbour, Charles, cut the hay. It was blazing hot weather and the forecast outlook was good. On July 17th he turned it, then rowed it up ready for baling on July 18th. I took this picture as  Charles was setting-up the tedder: 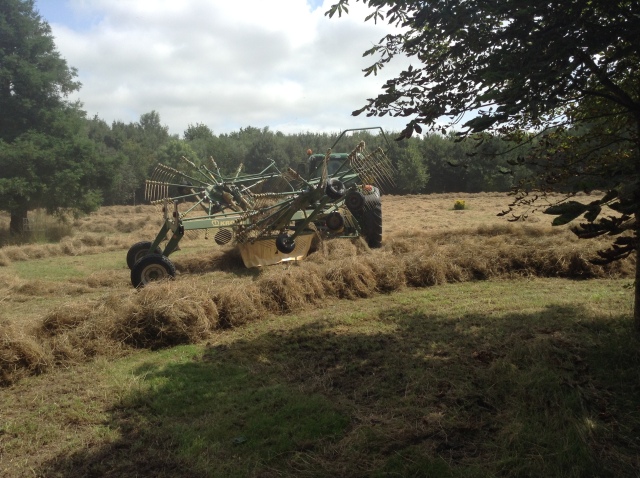 The baler was meant to arrive around noon on the 18th, but couldn’t, because at 11.00 AM a solitary cloud meandered in from off the North Sea, presumably bored and desperate for a leak, spotted our hay and relieved itself. Then it thundered and rained over the weekend. It dried out on Sunday afternoon; the dry spell continued and Charles was able to bale on the following Tuesday. Then more picture proofs arrived. At the end of that week I went up to London, feeling a bit stiff after driving my International for 8 hours the previous day, shifting bales, and signed copies of the Lifers’ Club at Unbound’s office tower (two rooms, actually) in Dean Street, Soho. While I was there I Tweeted this picture:

And Twitter now tells me that people (or their pet cats, in the case of my friend Mark Allen) are receiving their copies. I hope they arrive in time to be read in bars or on beaches during the summer holidays – I also hope the book keeps folk awake, just a bit…

And to add to the mix, I’ve been writing Alan Cadbury’s second murder/mystery, also set in the Fens, but this time in the peatlands around Ely. It’s turning out to be a rather different sort of book and although I’ve planned it in some detail, it’s changing quite a lot, as I write. The characters have taken over and I’m doing my best to record what they’re doing. It’s strange to be playing catch-up with your own creations.

Anyhow, I thought I’d close with a moody sunset view, taken from our bedroom window:

Sometimes a picture just works – one can get it spot-on.  Although as I look at it, I don’t recognise my own hand in it. I can’t help wondering:  was it me, or Alan Cadbury who pressed that shutter?