This coming Sunday (March 2nd), at 8.00 PM on Channel 4 we’re going to be shown the latest of the Time Team documentaries we filmed last summer. They were fun to shoot, but I must admit I very much missed the noise and team-spirit of the regular excavation shows, now sadly finished forever. There was also a huge amount of travelling involved, with lots of driving, crowded trains and even a flight (to Orkney, which I’ve already covered in a post last year). We were asked to suggest various themes and I came up with ‘Holy Islands’. Channel 4 liked the idea, but as time passed the commissioning editors started to change their minds and the programme changed shape, so that now (I think) it’s about prehistoric holy places and mummies. The mummies, incidentally are those burials found in Bronze Age houses on South Uist at Cladh Hallan, back in 2001 by Mike Parker Pearson and his team from Sheffield University. I managed to include Mike’s site in the two films we made (again for Channel 4) of my book, Britain BC.

So as I’ve already discussed the Orkney part of the film, and have no wish to return to Mike’s mummies (which anyhow he can do far better than me), I thought I’d say a few words about the bits that never make it into the finished film to be screened on Sunday. Often they can be just as interesting as the main topic. I well recall filming a regular Time Team episode on Shooters Hill, on the southern approaches to London. The film was about anti-aircraft defences and other WW2 stuff (a spigot mortar and pill-boxes etc.) which had been sited on top of this prominent hill, which overlooks the City of London and the eastern approaches, from the south. While we were filming the geophys team revealed a large and gently curving ditch which I knew at once had to be ancient. So I immediately told the Director it was probably wartime and part of the outer defences to the gun battery. If I hadn’t told that little porky I doubt if we’d have dug it. But we did, and to my delight we proved it was a hillfort ditch that circled part of the hilltop and had an eroded bank on its outside. It even produced a couple of very weathered sherds of what looked to me like later Bronze Age pottery – somewhere around, or just after 1000 BC. So I was well pleased, as were the local archaeologists – but it never made it into the final programme.

The surviving buildings of Lindisfarne Priory.

This time the edited-out archaeology has been the other way around and prehistory has trumped WW2. No film that purported to be about holy islands could avoid a visit to Holy Island, Lindisfarne, with its stunning Priory that produced the world-famous Lindisfarne Gospels – for my money one of the most beautiful books to be created by human beings. We parked on the mainland side of the narrow causeway so that our cameraman could get some moody shots of the island in the distance, when I noticed a stunning double row of WW2 anti-tank cubes. They were hastily made from the poorly-mixed concrete that is so characteristic of the time. Then as we started to drive across, I suddenly realised that had there indeed been a battle, the wonderful Priory ruins would undoubtedly have suffered severely. Still, what were they to do? It’s easy to forget that Britain’s uniquely rich array of some 14,000 medieval churches is the result of not having endured major wars and land battles, unlike our neighbours on the continental mainland. 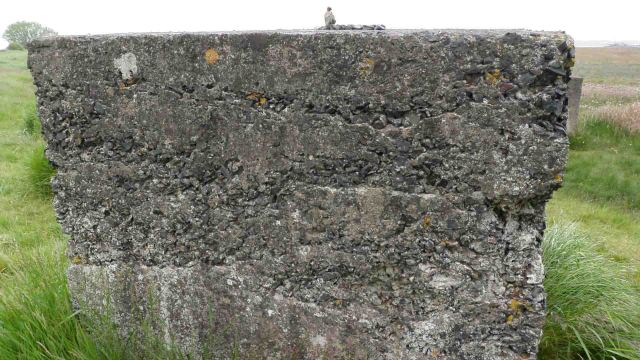 One of the Lindisfarne cubes, showing the distinctive, hastily-mixed WW2 concrete.

We were also filming a short distance south of Lindisfarne, at Low Hauxley, Northumberland, where Clive Waddington and his team have been excavating Early Bronze Age cist and cairn burials that have been eroding out of the cliff (and after that tidal surge in December, they dug them in the nick of time!). Again, we were pausing for a bite of lunch when I noticed that two massive concrete walls that extended out onto the beach, to protect the pumped outfall from a reservoir, were in fact made from wartime concrete anti-tank cubes that had been hauled or bulldozed there from elsewhere nearby. We know that at the end of the war, Britain’s beaches (especially along the east and south coasts) were covered in cubes and scaffolding and barbed wire. I’ve seen air photos taken, I think in   1944 or ’45, and there’s little room for bathers – anywhere. What strange times they must have been. I also wonder whether we today would ever be capable of rising to the occasion so swiftly. I cannot see planning officers or town hall bureaucrats granting anyone permission to erect such environmentally unfriendly things as anti-tank cubes, unless, of course, they were clad in timber and made to look Tudor, like some of the new housing estates. But I digress…

The cliff at Low Hauxley, Northumberland. The figure is close to the Bronze Age burial site.