I do apologise for the month-long gap since my last blog post – and also for the terrible title of this one, which will, I’m afraid, be a bit of a catch-up and hotchpotch. But so what, we do hotchpotches rather well in Britain – in fact we’re being governed by one at the moment: coalition, hotchpotch – what’s the difference? But I digress…

First, I must explain the main reason for the gap, has been the book I’ve been writing for Penguin over the past two to three years. I finished the first draft towards the end of August, then set it aside for a about three weeks, while I immersed myself in the start of the script-editing phase of Lifers’ Club. Essentially that was all about catching inconsistencies and cranking-up the drama at the start of the book; we might even have laid a few false trails, too (but that would be telling, so I’m saying nothing). Next week I’ll resume work on the script-editing, with the aim of completing it by the end of October. That way, we’ll still be on track to have the book printed for our lovely subscribers (who may now bask in the glory of having helped give birth to Alan Cadbury), in early May. That gave me most of September and early October to revise the first draft of the Penguin book, which I finished yesterday at 11.35 am. Sadly, Monday is our booze-free day, so I had to settle for tomato juice (in which we are currently swimming); I’ll crack open a bottle of Cava soon – or when my liver feels ready to receive it. The deadline for delivering the Penguin book is October 31st and I plan to re-read the manuscript one more time before then, to see if I can spot anything that seems grossly wrong, or out of place. Thereafter, I’ll be in the hands of my capable commissioning editor, Thomas Penn, incidentally, a very good author in his own right: his beautifully-written biography of Henry VII, the first of the Tudors, Winter King is a superb study of political cunning and ruthlessness – quite makes our current political leaders seem a bit weedy and wet. But I digress (again).

About a week ago my work on the Penguin book was rudely interrupted by a phone call from our neighbour Obie, who had just returned from taking his horse for its morning exercise along the small medieval droveway that runs outside our farm. He reported that during the night fly-tippers had set fire to a load of rubbish and builder’s rubble in one of our gateways. I went up there and pulled a piece of paper with a local address from out of the embers and then I called the fly-tipping people at the local District Council. They have agreed to clear-up the mess and they reckon they might be able to nail the culprit with that piece of paper and the fact that some of the rubble included fresh, and very unusual, paving material. Meanwhile, of course, I can’t use the gateway and the gate has been badly damaged by the flames. Who says there is such a thing as a victimless crime? Fly-tipping disfigures the countryside terribly, so I do hope these people get caught.

The delights of rural Britain: fly-tipping in one of our field gateways.

So when I was not talking to officials from the District Council, or staring at a screen, I was picking those plum tomatoes I described at length in the last blog post, if you can remember that far back. The crop is gargantuan and I’m giving all my friends and acquaintances bags of them, as I’d hate to throw any away. The main picture shows what are currently ripening on our sitting room floor, but there are more (maybe twice as many) out in the greenhouse, and another large batch are still on the vine, waiting to be picked next weekend, if the frosts hold off. I think next year I’ll do half as many plants. Last night I dreamt about making a rich red tomato wine…

Those Italian plum tomatoes ripening on our sitting-room floor.

It has been a wonderful early autumn so far and tomatoes aside, we’ve both been very active in the garden. There’s been a huge and very tender crop of runner beans and our Borlotti and Cannellini beans, which we keep for drying, are superb – and that despite planting them quite late, because of the cold, wet, early summer. Every other day, too, Maisie picks a large bunch of sweet peas, which make the kitchen smell of summer. Gorgeous, especially first thing in the morning. I also like decorative fruits and berries, if that is, the grey squirrels allow them to survive. On the Poop Deck near the house we keep various exotic plants, including an unusual example of Dianella nigra (the New Zealand flax lily), which we bought from a friend locally and which I’ve pictured here for its wonderful dusty blue fruits, which catch the dew first thing in the morning. Now a word of warning: these plants can be tender and are best moved inside over winter, but don’t put them in the toddler’s bedroom, as they are probably deadly poisonous! 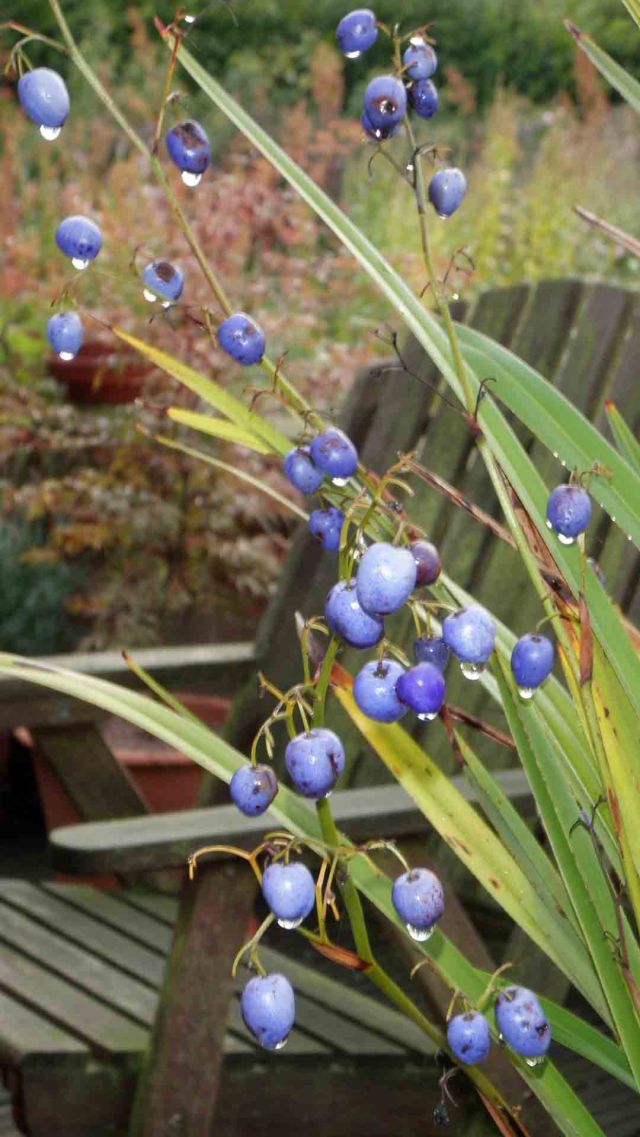 The berries of Dianella nigra on a dewy morning.

I must confess that most of my late summer and autumnal archaeology took place inside my head, but I did manage to find time to visit a wonderful excavation of a Victorian romantic hermitage hidden away in a wilderness alongside the stream at Belton House, near Grantham. The dig was being run by Rachael Hall, an old friend who is now a senior archaeologist with the National Trust. We visited the dig on Families Day and the site was alive (I nearly said crawling with) with young children and toddlers, none of whom fell into any of the trenches – although I’m not sure whether that was more down to their vigilant parents than the kids themselves. Not only did they find the lower walls of the hermitage, but the gravel path that led from an ornamental bridge over the stream, whose footings were being exposed on the bank. But there was a lovely friendly atmosphere when we visited – and this surely is what archaeology should be all about. 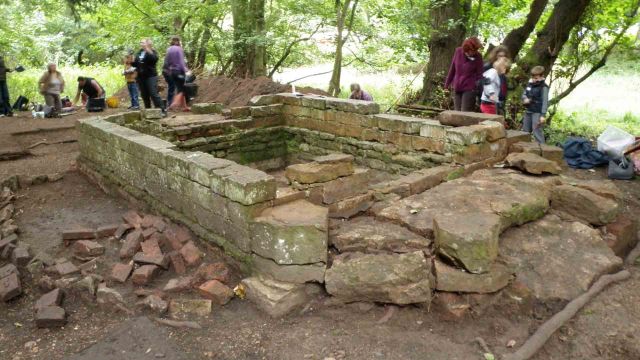 The garden excavation at Belton House, near Grantham.