Gin Lane Gazette: Roads to Then and Now

Here’s a slightly paraphrased extract from Britain BC (pages 67-9): “The old road from Peterborough to Northampton is very familiar to me. It twists its way along the Nene valley, swerving randomly from one side to another. Nowadays a soulless dual carriageway bypasses anything of interest, but that old road went through all the villages and hamlets. One of these was the pleasant village of Earls Barton … In 1982 an extraordinary discovery would be made that would forever tie the village into the Ice Age, over ten thousand years ago …”

I then go on to describe how in a quarry on the outskirts of the village a so-called Lyngby axe was discovered. These ‘axes’ were made from a carved reindeer antler and they seem to have been general-purpose tools used by the late Ice Age reindeer hunters who travelled across the cold tundra-like plains of south-eastern England, the bed of what is now the southern North Sea and across to Denmark and North Germany. It’s a superb piece, and now in the British Museum. And it was discovered by a young Adrian Teal, who was fascinated by archaeology and used to visit the quarry regularly with his father.

Fast Forward, as they say, to the launch of my Lifers’ Club project with the crowdfunding publisher, Unbound. It was an entirely new world to me and I was immediately made to feel welcome by everyone, including one or two successful authors who had just been through the entire process and had emerged, bloodied, but unbowed. Adrian was one of them and he gave me numerous tips and gently guided me into the strange new world of Twitter, Tweets and Tweeting (not a firm of chartered accountants). Now Adrian is at the next, and in some ways hardest, stage of the Unbound process: he has just launched his book into the shark-infested waters of the wider book trade. And this time I can offer some help, having been through that particular mill many times.

The most important part of launching a book into the trade is to have a good book. Despite what people say, you can’t sell a book on celebrity alone. Yes, it’ll go with a bang for a few weeks, but then it’ll die because readers, even the readers of celeb drivel, have brains and they’ll tell their friends. In fact, word-of-mouth is the most important salesperson for a new book. Nothing matters more – and I speak as someone who has had one or two very snotty reviews from academics. Ultimately they don’t matter and it’s best just to ignore them (not that Adrian has had any). The most important thing is that readers enjoy reading your book. And I bought a copy of Adrian’s Gin-Lane Gazette, but shortly after he’d achieved his subscribers’ target, so my name isn’t in the back! Oh, the injustice! The ignominy! The shame! But I digress.

Apart from writing a good and enjoyable book, the next priority is to get it reviewed.  I’ve seen an excellent review for The Gin-Lane Gazette in my favourite historical magazine, History Today, but today we live in the internet age, where blogs matter as much as journals, so I thought I’d cover it here, partly because I often do book reviews, have already done a post on cartoons (which I adore), but mostly because I loved the book and want other like-minded souls to enjoy it too. But I warn you, it won’t be a simple process. The Gin-Lane Gazette isn’t something you can just pick up and peruse. It will take commitment. But I assure you: it’ll be well worth the effort.

But first a very quick summary. It’s a ‘compendium of articles’ apparently written for the scurrilous periodical The Gin-Lane Gazette (an 18th Century equivalent of Private Eye, but with added knobs and whistles), between 1750 and 1800, by its Editor and Founder, Nathaniel Crowquill Esq. And that’s almost all I can say about it that’s factual. Oh yes, and the typeface is genuinely 18th Century, with long –s’s  (that appear as on the printed page as f’s). This takes a little getting used-to, but I assure you, it’s well worth the effort: so persevere!  At one level the book’s all about Georgian London, at another, it’s about our own times, and as I said in a recent Tweet, if I had my way I’d insist that all modern politicians were forced to read it. It might put them back in touch with some form of reality – and a time when their counterparts were held in equally low esteem by the voters.

The wonderfully imaginative text is supported and enhanced by the author’s superb drawings that are everywhere: as main illustrations, as small vignettes and as part of elaborate Grinling Gibbons-like frames and floral swags. It’s a real pleasure just to open. And here are three examples to whet your appetites. 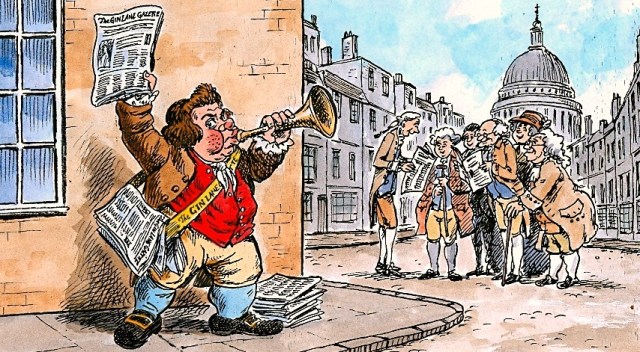 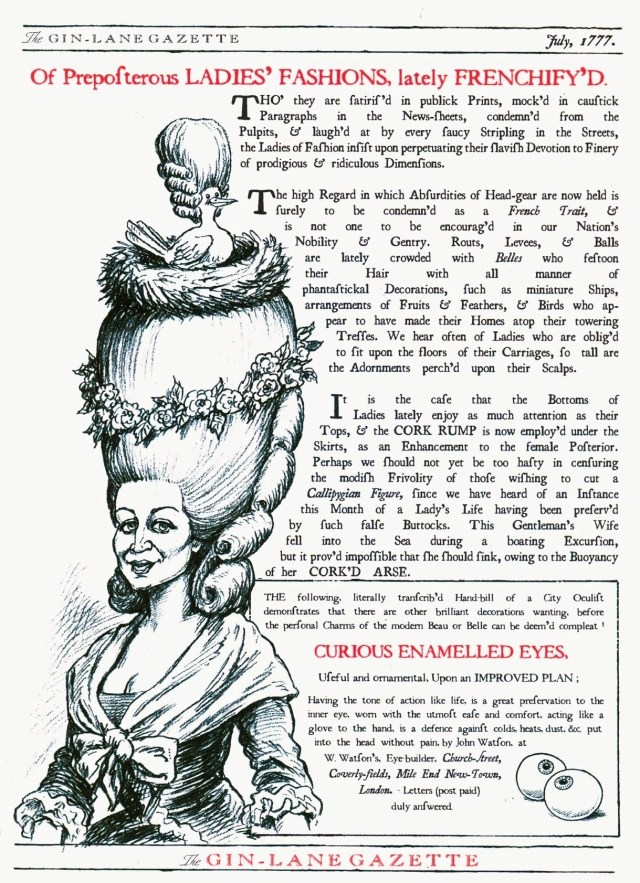 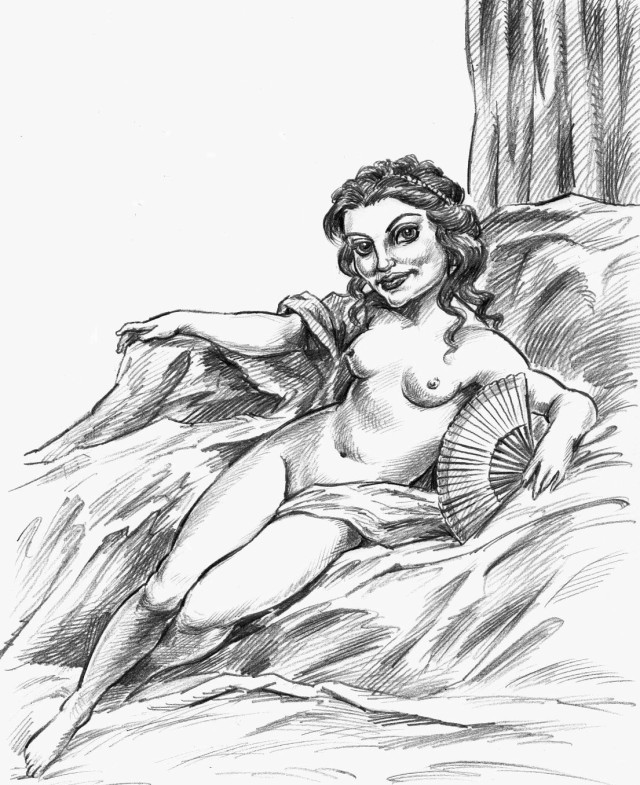 This book also raises some wider issues about modern approaches to the past. Adrian is a cartoonist and caricaturist and his work has been widely published in most national newspapers, History Today, and on the hugely popular TV quiz show, QI. But he does have a special affinity with the bawdier side of the 18th century. Indeed, don’t we all? I certainly do: I adore the novels of Sterne, Goldsmith, Fielding, Smollett, Swift and others. I’ve also had the great pleasure of working for two years in an 18th Century brewery in Brick Lane – surely the model behind Hogarth’s Gin-Lane (but if I’m wrong, please don’t tell me; I hold certain illusions dear)? There’s something so refreshing about the 18th Century: it’s so different from the prudery and starchiness of the Victorians and it also contrasts with the repulsive double-talk that is the management-speak of our own time. And besides, what’s wrong with bawdiness? We sometimes forget that a drunken crowd in a pub can talk sense. They can also cut to the chase, and express a few home truths that we in our prissy middle class bubbles would rather avoid.

Adrian’s book is all about pissing on convention and bursting those prissy bubbles. The spirit of his writing, and of his cartoons, is 100% genuine 18th Century. But don’t make the mistake of thinking it’s like those re-enactors who dress-up as Vikings, Cromwellian soldiers or US marines about to sail off to Normandy for the D-Day landings. Invariably those people are clean, washed and scrubbed. Their weekdays are spent in offices staring at computer screens. They are no more re-enacting the past than I am experiencing Indian culture when I’m forking-down a Chicken Bangalore Phal in a local curry house. But so what? Both are highly pleasurable activities and surely people should be allowed to do pleasant things without the likes of me scoffing at them? But having said that, we should also be aware of the limitations of what we do. To re-enact is not to re-experience or re-live. It’s not even truly experimental. But it’s a form of populist history, even so, and as I said, it’s fun – and it makes a great spectacle. But it doesn’t take anyone any closer to the bit of the past in question. That’s my point. To do that, you need to immerse yourself deeply in the period. I see it as an almost Zen-like experience. It’s not until you’ve lived, slept and dreamt the Bronze Age for years that you can say you’ve got any closer to it. Put another way, it takes discipline, energy and above all commitment – and stamina, too. But it’s worth it. Boy, is it worth it!

I think it is very important that we try to come up with new ways of connecting to the past. Historical novels and costume dramas are one thing, but increasingly I find them less and less convincing. Sagas like Downton Abbey and the recent BBC series about a medieval queen left me cold (not that I watched any complete episodes). And why? Because the characters were all  manifestly modern people. The young women wore modern make-up and like the young men were impossibly glamorous, but in a Celeb Magazine sort-of way. It was a more glossy, blander version of people re-enacting Viking Age battles and hacking merry hell out of each other’s plywood shields with double-sided axes. So, if you want more than just historical pap, you’ll have to be prepared to make the effort. Personally, I’d first buy a book by Jane Austen, or one of the authors I mentioned earlier. That’s the genuine article. But there are only a few of these – and besides, why not experiment a little?

So if you want to try something a bit different, it helps to be in the company of somebody who has made a deep commitment to the period. And that’s what Adrian has done with his book. Everything about it is ‘real’: the drawings are of real people and the scandalous anecdotes are both Georgian and modern at the same time. In a nutshell it’s a genuine re-creation, rather than an ephemeral re-enaction. And right now, Unbound are running a special Mid-Summer sale of their books. So don’t delay! Go to:

A great book to take on holiday, but keep it out of the reach of children and young teenagers….