Grow Your Own: Part 2, Digging

The world of vegetable gardening is, as they say in the press ‘sharply divided’ into two schools of thought: to dig, or not to dig. I’m a life-long digger and am not about to change, unless, that is, I hurt my back; only then will I forsake my trusty spade and fork. Now I’m not about to slag them off, because they do have soil science on their side, but non-diggers, too, take great pains to prepare their beds for the forthcoming growing season. So now, and the months of later autumn are when you want to clear away any perennial weeds such as couch grass (sometimes known as twitch), bind-weed, creeping thistles, creeping stinging nettles, ground elder and brambles. As I said in my last Grow Your Own, I’m personally not averse to using glyphosate (RoundUp), but only to beat these persistent problem weeds – and if your garden is afflicted by Mare’s Tail and Japanese Knotweed, then even glyphosate will have a struggle. If you have either of them, I’d go on-line and seek specialist advice, from people like the Royal Horticultural Society.

You want to get the digging done by the onset of the hardest air frosts, usually in early and mid-January. If you’re just starting a veg garden it might well pay you to borrow a Rotavator-style tiller and rough up the whole of your patch and then cover it with three to four inches of manure or compost, having first removed as many couch grass and creeping thistle runners  and roots, as you can spot. You’ll soon get to learn how to identify bindweed and other roots. But whenever you see them, pull them out and put them on the bonfire. Never compost them!  Having done that, let the worms and wet weather incorporate your spread of manure or compost into the soil over winter. If needs be, you can work it in with a fork, by hand. At least that way, you can start planting in all of your three or four zones, come springtime (I discussed crop-rotation in the previous Grow Your Own). Then start ‘proper’ digging, and in one zone only, next year.

So this is about ‘proper’ digging of the zone into which you will be planting potatoes and (much later) tomatoes. These plants are, of course, related (look at the flowers), natives of America, and are prone to blight and other long-term pests, including potato cyst eel-worm. So they must never be grown on the same patch of land two years running. But now to digging and let’s start with the organic material you are to dig in. You can often buy horse manure for about 50p a bag, as the horse owners are keen to get rid of it (and for some reason rarely seem to be gardeners – I think it’s something to do with having more money than sense. Whoops, a digression…).  But remember, even horse manure needs to be well rotted: if it smells strongly of horse, rather than manure, it’s a sign that it’s still too fresh. By adding un-rotted manure to your land you will, in effect, be removing nitrates from your garden. So the rotting-down process effectively depletes the soil – which is why it should happen in the heap or bin. 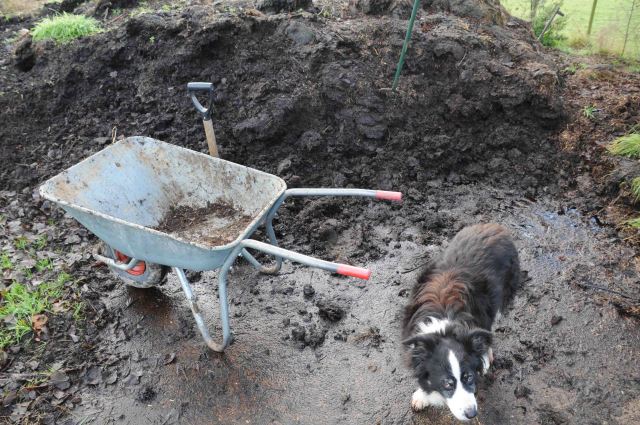 Compost should take a full year to be really well rotted-down, although some experts can do it much faster. The trick is to keep the heap or bin well aerated. I turn my muck heap over, using the front bucket of my aged tractor, but I’ve also done it by hand. The muck or compost should be crumbly and not too fibrous. It’s also a healthy sign if there are lots of small red worms in it. My chickens seem to peck away all the slugs and slug eggs, which is an advantage of keeping a few free-range birds around the place. Muck and compost heaps also attract the types of insects that swallows like and one of the pleasures of summer is to stand near the muck heap and watch while these most elegant of all birds swoop and twirl just a few feet above the ground. I could watch them for hours – especially the young birds who get passed tasty morsels, while still on the wing, by their parents and older siblings. 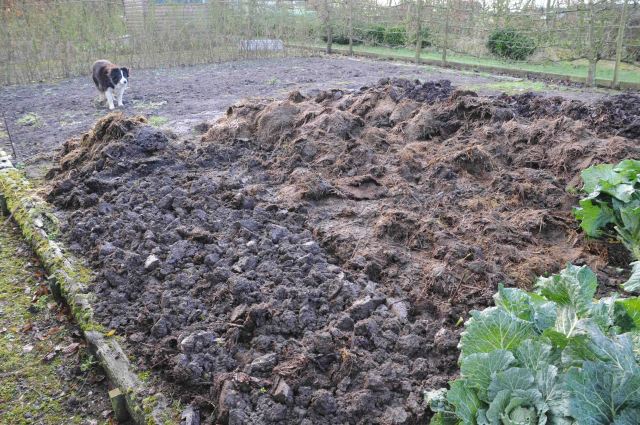 A general view of the patch to be dug, with brassicas front, right, heaps of manure and a small area already dug-over (foreground, by path)

I pile the well-rotted muck in long heaps on the ground to be dug. This helps drain it in a wet year, like this one. Then I dig it in with a spade or a heavy-duty garden fork. I’ve also taken to using a stainless steel spade, which sheds my heavy clay soil rather better than my old spades did. Make sure that the muck or compost goes well into the ground, then turn the spadeful of soil on top of it. Finally break up that clod of soil with a couple of chops – but don’t attempt to reduce it to crumbs, as that’s the job of the frost. If you reduce the soil to a fine tilth at this stage of the year, it’s likely to form a hard crust or ‘pan’ by springtime. So leave it rough and nature will do the rest. Finally, two words of caution: don’t work on, in driving rain or very wet conditions, as your feet will (a) regret it and (b) will puddle the ground surface and do long-term, structural damage to the soil. What you also don’t want to do is bury large lumps of frozen soil, which will take an eternity to unfreeze, come the spring. It’s a matter of common sense. Oh, and one absolutely final thing: don’t add any fertilizer to the ground at this stage. That can come later. At this time of year you should be more concerned with soil condition, than fertility – that’s for spring and summer.

Close-up of the dug-over area, showing the size of clods. My soil is now in quite good condition and naturally breaks down to clods this size. Fifteen years ago it was more stiff and clay-like, and turned over in large lumps, which had to be chopped-up with a spade.