DON’T PANIC! I’m not about to write about one of Ruskin’s many views on art, life or anything else, for that matter. One of the first and most influential of art critics, Ruskin had loads of views – perhaps even more than some of the chattering classes that clutter our airwaves so often. But at least they were his own ideas – he didn’t nick them from others, as has happened to me more than once on television. But, as I seem to be saying far too frequently these days, I digress – and I’ve barely even started. I’ve noticed, I’m finding it harder and harder to keep to the point. Maybe I need a holiday. (Short pause) On reflection: Yes I do – and soon – which reminds me: that’s what I’m meant to be writing about.

Maisie and I are fans of short breaks, rather than extended vacations. I can remember old people (like us!) saying to me after an exhausting season of excavation: ‘What you need, young man, is a break. Remember: a break is as good as a rest…’ And, damn them, they were right. Dead right – or I’m right, and they’re now dead. HELL! I’m digressing again…

Frequent short breaks are the answer, but for me they must have a point.  Neither of us ‘do’ aimless. We also like the money we spend on holiday lodgings to go, if possible, to a charity. Our favourite is the Vivat Trust, who do a superb job preserving strange old buildings, which would otherwise be hard to finance. Our last short break, back in May  featured in a an earlier post (Here Comes Summer), so now I want to recall one of the many short breaks we took during the five years it took me to write The Making of the British Landscape (which if you haven’t done so already, you must rush out and buy – or get the ebook. But I digress…). The main purpose of the trip was to get pictures of the Lake District (pages 500-505), which was the first of the really famous British picturesque landscapes. I got lots of pics of Beatrix Potter land and we decided to lodge for our last three nights in a Vivat Trust property, at Church Brow Cottage, Kirkby Lonsdale, in Cumbria. It was an extraordinary place, built in the 1830s by a local vicar (it’s on the very edge of Kirkby Lonsdale churchyard). We had to watch ourselves in case we collided with gravestones after a splendid night out. The eccentric reverend had built the little house on the side of a cliff at the edge of the valley of the River Lune. From behind (i.e. from the churchyard) the cottage appears as a small stone bungalow, but when you walk down a short flight of steps at the side you discover it’s actually got two floors. 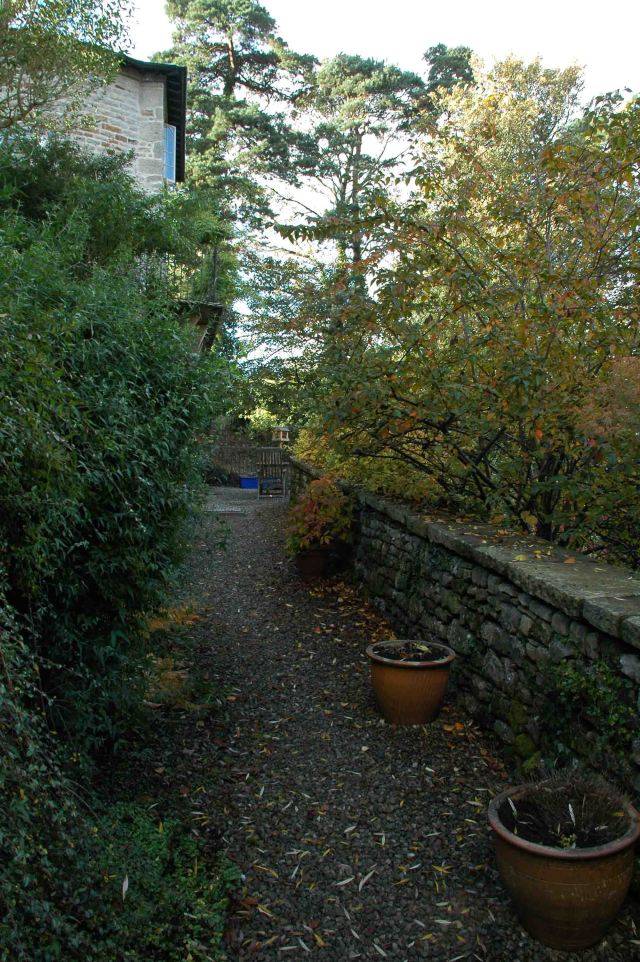 The rear or garden aspect of the cottage, which mysteriously becomes two-storeyed.

The good vicar built Church Brow Cottage specifically to enjoy what has come to be known as Ruskin’s View, which had long been famous in the area, to judge by a small stone gazebo alongside the cottage which again was built, probably in the late 18th century, to enjoy the self-same view. And it is stunning, and O-so-English: a gently meandering river, rolling hills, sheep and tranquillity –and some rather obtrusive brightly painted 1980s grain silos in the centre of everything. I could hold forth about them (Ruskin doubtless would have done, together with those metropolitan aesthetes who made our lives so difficult during the excavation of Seahenge – stop: Digression Alert!), but I won’t:  farmers have to earn a living and the silos will not be there for eternity, unlike the river and its stunning valley.

‘Ruskin’s View’ of the valley of the River Lune, Kirby Lonsdale

Then on the very last morning of our stay I got up early and took the misty shot which appears in The Making (plate 16) and echoed a much earlier (1818) painting by Turner (plate 15). The entire visit was magical: in Kirkby Lonsdale Maisie discovered the award-winning, best cheese shop in Britain (Church Mouse Cheeses), where she wandered around, choosing local cheeses to the accompaniment of a live pianist. In a nearby pub (The Sun Inn) we stuffed ourselves on Lancashire hot-pot and pickled red  cabbage. And then there was an outstanding  butcher (Dales Butchers), where we bought Cumberland sausages – and took them home with us to Lincolnshire – arguably the spiritual home of fine sausages. All in all, it was wonderful – and completely unexpected. I’d no intention of writing about Ruskin’s View until we saw it. 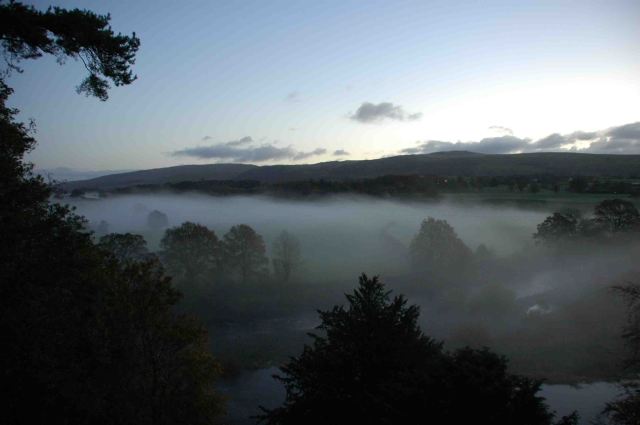 The same view from Church Brow Cottage shortly after dawn, after a rainy night

I hope our next break will be before winter. If we can find time, we’re planning to spend a few days, in another Vivat Trust cottage, near Hay-on-Wye. Failing that, I’d love to revisit Church Brow Cottage. For what it’s worth, I’ve done the Hay Festival twice, but if I manage to book the cottage there, I’ll be free to indulge myself, not so much with books, but in food, drink and whatever hoves into view. Who knows, if anything interesting turns up, it might creep onto this blog; or again, I might just keep it to myself; or I could turn it into… Shut up, man, Digression Alert!