About a month ago I received a phone call from Philip Clarke, the Executive Producer at Time Team, to find out whether I’d be able to go to the British Museum to attend the British Archaeological Awards ceremony. To be honest, my heart sank slightly: Time Team has been around for so long that people in the archaeological world are inclined to take it for granted and in the past we’d been passed over in favour of websites and other, more immediate projects. I guess it’s part of life, but I didn’t want to waste the best part of a day sitting on my bum in London. I also feel that the profession and indeed academia in general still looks down on those of us who popularise the subject: they seem to think that making films or writing books that appeal to the public at large is easy, and not very relevant.

Most archaeologists never write ‘accessible’ books or articles and I suspect this reflects the fact that most couldn’t, even if they wanted to. In reality, such writing is far from easy: I reckon writing The Making of the British Landscape, which kept me very busy for five full years, was vastly more demanding, both personally and intellectually, than even the largest of the ten, or so, major excavation and survey reports I’ve published over the years. But if you say that to a fellow archaeologist he or she will smile patronisingly: they don’t realise that writing dreary jargon is far easier than expressing yourself in clear, concise language that everyone can understand. So in my books I call a ditch a ditch; in their reports they call it a ‘linear’.  The trouble is, that if you use obscure language you’re also protecting yourself from having to think through the implications of what you’ve just written. So I’ve visited professional sites where people have revealed a network of ‘linears’, which they’ve carefully noted and planned as such, but have completely failed to realise are actually part of an ancient field system. But I digress.

So I took a slow train from Kings Lynn and after a wonderful journey through dark thunderstorms over the Fens, I arrived in London, which was hot, crowded and sticky. I have to say the Award ceremony was very well organised and Loyd Grossman was a snappy and amusing master of ceremonies. Some of the video clips which summarised the various projects were less than transfixing (too much jargon), but even so, the best projects came out on top. The superb team over at Must Farm won two major prizes (Best Archaeological Discovery and Best Archaeological Project), for which they were hugely applauded. And quite right too. Then it came to the Best Public Presentation of Archaeology. Again, the video clip was a bit drab (why didn’t they use something from the programme itself?), but to my astonishment I found myself walking up onto the stage and being presented with an award by the Minister for Culture, a nice smiling chap in a suit (but whose name temporarily escapes me); and I also got to shake Loyd G’s hand. So worth the trip.

I receive the award on behalf of Time Team. Oh dear, I should have looked a bit smarter, but in a rare dry spell I had been planting-out Brussels sprouts until the last minute, before dashing at break-neck speed to the station.

The programme that took the honour was Time Team’s 200th, which we filmed in an almost-dry reservoir at Tottiford, on the edge of Dartmoor, in Devon, in the late summer of 2010. I was the Archaeological Director, but the star, as usual, was Mick Aston. And what a film it was: we showed that this small self-contained valley had been a special place from the later Mesolithic (around 6000 BC), through to the Bronze Age. In the process we also discovered the remains of a complete stone circle. Not bad for beginners…

A general view of the dried-out Tottiford reservoir in a small valley on the edge of Dartmoor. Note the low mound in the foreground. This was the site of a Mesolithic settlement. Later, in Neolithic and Bronze Age times, a double stone row, ceremonial ‘avenue’ was built to approach it (from the left in this picture).

The floor of the reservoir was still incredibly muddy. Here you can see a film crew gathered around a cameraman on a step ladder. It took four large men to hold the ladder steady! 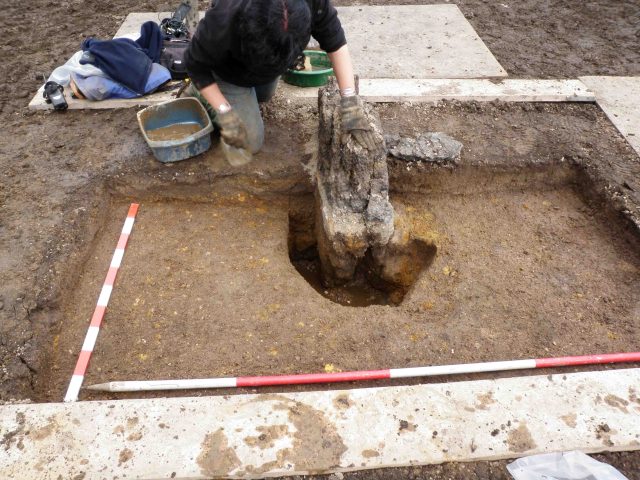 A close-up of one of the stones of the Bronze Age stone circle which had been carefully positioned on slightly higher ground on the other side of the low mound to the double stone row. Note the socket hole dug in prehistory to ensure that the stone remained upright. This socket had been packed with smaller stones to keep the main stone firmly in the ground.

My hotel room was next door to Mick’s and we shared a balcony. That was where I took this photo.

And that brings me to the real point of this blog post. During the award ceremony, the Chairman, Mike Heyworth (Director of the Council for British Archaeology), announced that the Committee had decided on a special one-off, Lifetime’s Achievement Award. It was to go to Mick Aston. The announcement was followed by a splendid video of Mick receiving the prize at a family birthday party. Actually, it was very moving. So well done Mick – and I for one wouldn’t be at all surprised if you didn’t get another one in twenty years’ time.