Bronze Age Boats and Those Who Dig Them

I’m proud to say I was once a digger. And I think I was quite a good one – OK, good-to-average – but not in the same class as, say, Phil Harding. Today he’s famous as a Time Team person, but it’s less generally known that he’s also just about the best digger of archaeological stuff that I know. Phil could turn his hand to most sites and has done so in his twenty years with the Team. But for many archaeologists there’s a big divide, between wet and dry sites. As someone who’s had to dig both, I don’t accept that one is easier, or harder than the other. They’re both different and with their own special challenges. Dry sites require a good eye for levels and a steady hand; they also demand great sensitivity to colour and textural change. Wetland sites need delicate handling: ancient wood is often very soft and can be damaged beyond repair in the twinkling of an eye. It’s like removing the chocolate sauce off vanilla ice cream: the trick is not to cut into the ice cream.

I’ve been put in mind of saying a big Thank You to archaeological diggers in general, after making several visits to those extraordinary boats at Must Farm, just a stone’s throw away from Flag Fen, near Peterborough. I’ve been visiting the site over a number of years, as my wife, Maisie Taylor, is their wood-working specialist. And I tag along for the ride whenever I can. I’m also interested because Must Farm is just down the road from Flag Fen, and if it wasn’t for the huge banks that constrain the waters of the canalised River Nene, you could probably just make out people standing at either site. They’re that close. 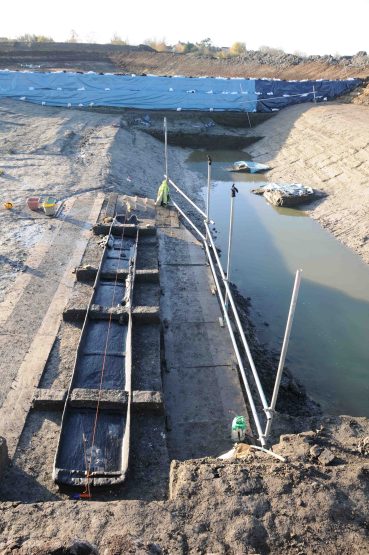 A general view of part of the site at Must Farm. Note the boat, almost fully excavated here, and the bed of the oldest (Bronze Age) stream channel, with water standing in it, to the right.

When we excavated Flag Fen in the ‘80s and ‘90s, I reckoned our team was as good as they get. And I was extremely proud of them.  To be quite honest, in the years that followed I visited a number of other wet sites, with loads of prehistoric wood, and wasn’t always that impressed. Then Mark Knight, and with him teams of diggers from the Cambridge Archaeological Unit, began to work in the Peterborough area, and suddenly standards began rapidly to improve. Mark knew how to encourage and motivate people – and it showed. Like our teams ten years previously, the Cambridge Unit also built up specialist diggers, who understood the local soils, and groundwater conditions. This was an important step, because no two wetland sites are never the same. They can vary hugely over short distances. So Must Farm, the site that forms the subject of this blog, is only half a mile from Flag Fen, but the soils and the preserved wood there are very different.

Must Farm has just been reported in British Archaeology. It’s a sensational site in every possible respect. As it’s there for all to see, I won’t repeat the magazine article, other than to note two things. The first (and less important) is that this very short stretch of Bronze Age British river (imagine a two-minute stroll along a towpath to get an idea of its scale) produced no less than 6 boats and dozens of  intact fish weirs, complete with their traps. ‘Isn’t that unique?’ Someone once asked me. ‘No,’ I replied, ‘far from it. There must have been thousands like it in prehistory – only we haven’t found them yet.’

What we’ve been granted at Must Farm is a rare glimpse of a vanished time. We think of Stonehenge in all its splendour atop Salisbury Plain, meanwhile down in the river valleys below the Plain there must have been hundreds, no thousands, of people earning a living on, or around rivers and chalk streams, by fishing, fowling or just ferrying folks about. In later prehistory the flatter land of the lower river valleys was where daily life happened. It was like Soho compared with Westminster Abbey. What Must Farm is telling us is that in the later Bronze Age (roughly the millennium after 1500 BC), Britain was a developed and civilised place. These people were living together in harmony . Yes, there would have been conflict from time to time, but just like today, most of people’s lives were lived in peace. And in remarkably prosperous peace, at that.

But the most important aspect of the Must Farm boats is the way they were excavated. Frankly, and as someone who knows what he’s talking about, the work was superb. Remember: the wood they were digging isn’t wood as we know it today. All the tough, resilient, lignin has gone, to be replaced by water and crumbly, fragile minerals. If you excavate ‘wood’ of this sort with a lollipop stick you can gouge great holes in it. To excavate so much wood to such a high standard, and in sometimes very unpleasant conditions, takes stamina, concentration and huge discipline. As I walked around the site in the autumn I couldn’t believe what I was seeing. The boats themselves were in perfect condition. One even floated, when it was being lifted. But it was close inspection that revealed just how good the excavation had been.

Maisie showed me the base of one boat, where a change in colour from blackish to reddish brown revealed the transition from the tree’s heartwood to the outer, living, sapwood. Dutifully I took a photo. Back at home I put the picture on a large screen and was astonished at the surface of the boat: there wasn’t a nick or a scratch on it. Superb. 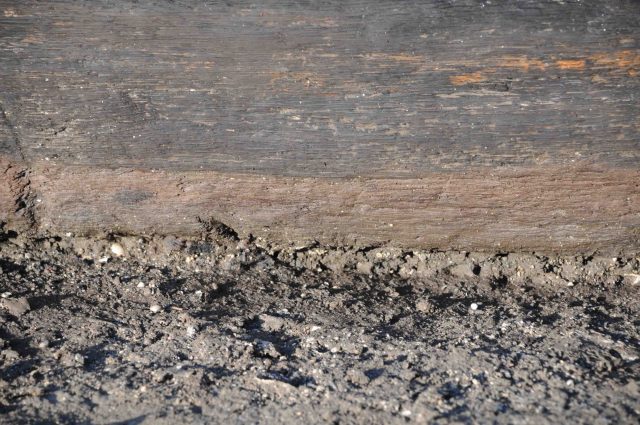 A close up of the lower side of one of the Must Farm Bronze Age boats, showing the transition from heartwood (dark) to sapwood (reddish colour). Note also the superb quality of the wood’s surface, as revealed by the excavator.

In several places the diggers revealed where clay had been deliberately smeared into the joints of patches and repairs, to make them water-tight. In fact these boats had obviously been used and most were probably at the end of their active lives. One so often gets the feeling that ancient boats (such as the huge Iron Age craft from Hasholme, now in Hull Museum), owe their survival to the fact that they were quite new and had been deliberately sunk, maybe as offerings, or as part of funeral rites. I felt the Must Farm boats all had a wonderful ‘lived in’ feel to them. Eventually, no doubt, Maisie’s team will tell me if I was correct. 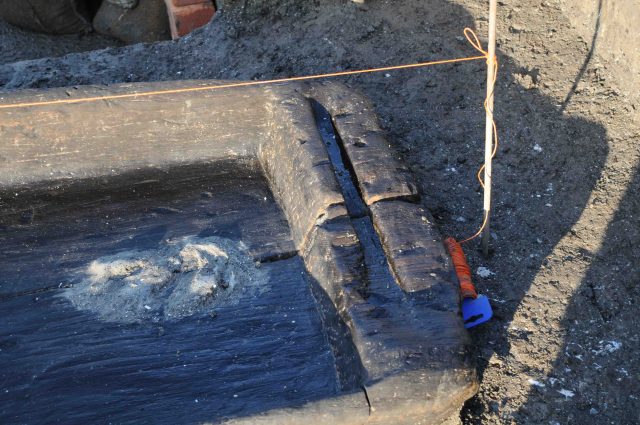 A close-up of the stern of a Bronze Age boat showing a patch of grey clay that had been smeared over a repair to make it water-tight. Another example of superb digging technique.

In addition to the boats, there were dozens of fish weirs and traps, some of them intact. Now if boats present a challenge to an excavator, fish traps are something else. They’re made from fine wattle, often willow, but sometimes (I can think of an example in Holland) from dogwood or Cornus, a wet-loving shrub. I’ve just been cutting some overgrown Cornus back from the edge of my wood, and I’ve been whipped across the face several times by its very pliant young growth. But after three thousand years, all the strength and elasticity will have gone, and then the remains of the fish trap are as fragile as thin eggshell. How the example I picture here was dug to such a high standard, I’ll never know. I certainly couldn’t have done it myself. 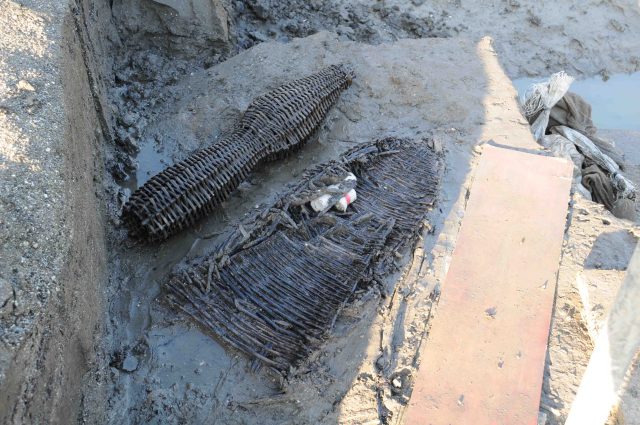 Woven wicker fish traps were positioned down-stream, at the funnel-end of a wattle fish weir. The ancient (Bronze Age) example shown here has collapsed in on itself. A modern basketry trap, still used in the Fens to catch eels, has been placed alongside it for comparison.

So I want to take this opportunity to proclaim:

WELL DONE EVERYONE AT MUST FARM. YOU’RE IN A CLASS OF YOUR OWN.

And that goes too for Kerry Murrell, who has led her team so very well, during a sometimes bitterly cold winter.  We read so much in the press about celebrities, politicians, ex-Prime Ministers, bankers and other dreary, over-paid, egotistical nonentities. How nice it is that some quietly dedicated people have chosen to do something so very worthwhile – and  for almost no money. Thank you Must Farm diggers: you have restored my faith in humanity.